For anyone who has had a dog with recurrent ear issues (even if it is only every few months) there is usually a feeling of frustration when seeing your dog shake its head again.

This feeling of frustration is very reasonable – each time the ear infection flares up, there is more treatments (and tests) that are needed. From your dogs point of view, each episode causes further ear canal damage too.

This can include thickening of the canal cartilage support, narrowing of the canal, growths (polyps) in response to the inflammation and damage to ear drum.

These are the questions I commonly get, when it is apparent a dogs ears are “infected” again. 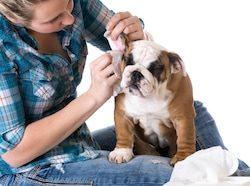 Why do dog’s ears get infected?

The answer is always – the ear canals became inflamed and only then could infection set in.

Inflammation ALWAYS precedes infection (with the sole exception of something like grass seed being present for quite some time in that ear canal).

A dogs ear is a beautifully designed tube that is waterproof.

The waterproofing coating (wax) is constantly produced at bottom of canal and supposed to slowly move towards top of canal over about a month, taking embedded debris with it.
Inflammation completely changes the nature of the glands of the ear canal and it is no longer the beautiful waterproofed canal it once was.

Bacteria and yeast will increase in number, and themselves cause an inflammatory response by the body (further increasing the existing inflammation)

Does Water in the Canal cause infection

Logical question but the answer seems to be “no”

A dogs ear has beautiful waterproofing and defence against debris.

Only when the ear canal gets inflamed does anything seem to go wrong.

OK, so what causes the inflammation?

Often the answer is a little different for every dog.

Some are predisposed because of the way skin cells are formed in the canal (Cocker Spaniels are one example).

Most have allergies that create the inflammatory response within ear.

Allergies usually fall into the bracket of Food or Environmental – and frequently both together.
Why it is that a dogs ear canal reacts in such a way to allergies – nobody knows. After all humans get allergies too, and our ears are not usually the focus of such repetitive inflammation.
However, it is perhaps just one of those species differences – and dogs copped the short straw with ear canals frequently becoming involved when allergies are present.
. 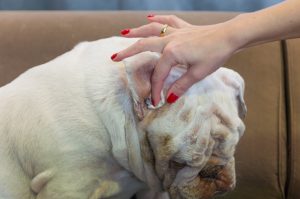 70% of the time we see a yeast, called Malassezia.
This is NOT contagious to you or your other animals.
This is NOT caused by antibiotic use.
The Malassezia yeast loves fatty waxy stuff as food and so with the inflamed ear canal having more waxy discharge, contributes to the yeast increasing in numbers.

The remainder of the time it is bacterial infection. It is usually true that bacterial infection becomes involved when the yeast infection has been present for quite some time, or the ear canal has already got changes in the defences it can offer because of chronic inflammation.

How do I get rid of the infection?

Bacterial infections are more challenging (because they indicate greater length of time of infection) and require more targeted treatment, frequently using flush and drop and antibiotics together. We are always still seeking for every dog to understand just why the inflammation was present

What can I do to prevent infection?

This is going to depend on the reasons for inflammation being prevented – or at least controlled.

What can I do at home?

Of course doing something at home to make comfortable is important.

There are some steps you can take that will help.

Warm oil and gentle massage of your dogs ear canal will temporarily provide some relief.

However – beyond this temporary comfort is the job of finding and controlling the inflammation that is causing the infection to be present. 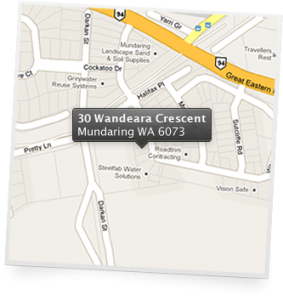